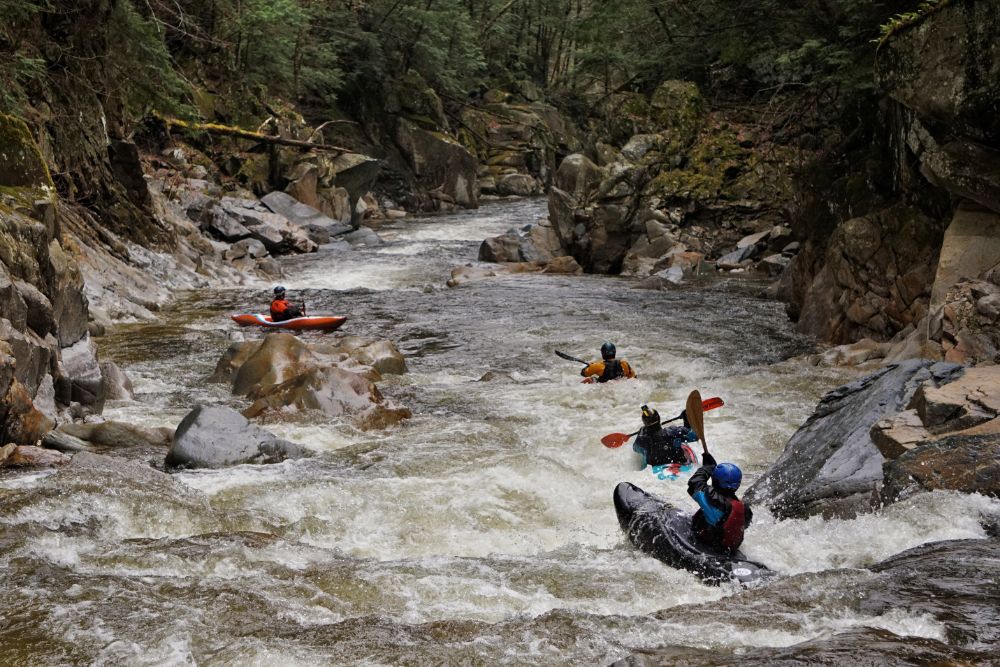 There is a detectable strengthening of light on the horizon, and oh boy is it good to see.  I fear these posts were becoming redundant.  After all what new is there to report about the past spring of whitewater kayaking in Vermont?  A lingering pandemic, a continued drought, and a meca to the north locked away do not make for exciting whitewater tales.  Despite this perfect storm of unfavorable conditions, boaters found a way to enjoy what opportunities there were, as we always do.  In the words of a frustrated but ever optimistic kayaker I conversed with this spring  “All I need is an eddy line.”

It is debatable what factor was the dominant influencer over whitewater boating in the spring of 2021.  Snowpack was meager, temperatures were unseasonably warm, precipitation was below average.  However in 10 years nobody will remember these.  What they will remember is a pandemic.  One that despite the beginning of the largest mass vaccination program in history, was setting daily records just as spring boating was beginning to open up.  And so memories of March and April of 2021 will be inhabited by masked faces, hesitant high-fives, and shuttles done by bike, foot or truck bed.  Fortunately these memories will also contain an afternoon or two in a CVS in Morrisville, or The Fairgrounds in Essex, or a Rutland Holiday Inn Conference Hall, followed by a day or two with an arm too sore to paddle.   Lastly they will include June 14th; the lifting of the last of the Covid-19 restrictions in Vermont after an impressive and nation leading 80% of Vermonters had been administered a vaccine.  Now in early summer, things have begun to return to the way they were and should be, with packed shuttle cars and beers shared on tailgates.

No winter thaw and a below average snowpack

Kayakers will gladly trade a winter thaw for longer spring runoff.  2021 decided to withhold both.  Temperatures were consistently cold and rivers were solidly iced over for the duration of the winter.  Unfortunately this did not result in any increased snowpack – just ask any skier, assuming you have 20 minutes and a tolerance for ski-jargon laced griping.  On top of the lack of snow depth was the lack of water contained in that snow, as a thick heavy base never formed and the fluffy powder held little in the way of future runoff.   What snow we had went quickly, hurried along by a string of beautiful warm days, which did provide some excellent early spring boating.

Some quality boating, then gone all at once

March can be a finicky month, with the faucet being frequently turned on and off.  At times, when rain falls on an already melting snowpack, the faucet is opened full bore, dishing out high water days in some of the most unpleasant conditions.  March of 2021 however saw sunny days and warm weather, providing some truly enjoyable snowmelt boating.  Unfortunately, the snowpack was only enough to sustain a short window of runoff, before being accelerated to depletion by a precipitation event at the end of March.  By the time April rolled around, the normally reliable snowpack was spent and boaters were left hoping for rain.

No snow no rain no boating

With an enjoyable March in the books you would think morale would be high amongst the Vermont kayaking community.  This was not to be in early April of 2021 as the last drops of snowmelt trickled their way by. The writing on the wall became all too obvious when one looked to the hills.  Depressingly devoid of snow, and already showing signs of an early bud-out, boaters knew what this meant for the woods and rivers already in the midst of a prolonged drought.  Only significant precipitation could provide boating from here on out.  And so patiently and hopefully they packed away skis and winter jackets, waiting for rain that would not come.  In fact, for virtually the entirety of April boating was limited to low water laps of the fallback rivers.  Only two brief windows in early May provided any opportunity for quality paddling. 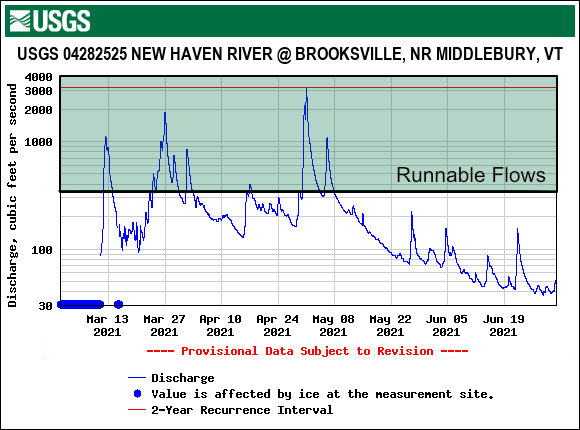 From the Vermont Drought.gov site regarding recorded drought conditions:

The Importance of AW and Dam Releases

If nothing else, the spring of 2021 highlighted the importance of the few dam release rivers we are lucky enough to enjoy in Vermont.  Two in specific were critical to salvaging what little season boaters were able to enjoy.

The Green River provided runnable flows on 3 consecutive Fridays in late April.  While it is easy to lament the difficulty this creates scheduling-wise, reports are that all three releases were well attended by both locals and visiting boaters alike.

“Morrisville appealed FERC’s denial of effort to convince FERC that DEC waived its water quality certification for the project. The appeal is on hold while unrelated litigation in Maine proceeds. We plan to file as amicus curiae (friend of the court) along with TU and VNRC and will be represented by the Vermont Law School. Separately, there is a call scheduled for late August with Morrisville and FERC to discuss Morrisville’s planned license amendment. They may be seeking to remove the Green from their FERC license and possibly decommission the dam. This could be a threat to future releases there. We will intervene and plan to oppose any attempt to eliminate releases. We will also oppose any effort to simply abandon a deadbeat dam.”

Obviously this is a concerning situation but if history has anything to show it is that Bob and the team at AW have been tenacious and effective in fighting for us on the Green.   If you aren’t already a member definitely get signed up or donate over at  American Whitewater.  If you’ve ever been fortunate enough to paddle The Green you will understand the importance of member support in this fight.

Also up for relicensing is the Sheldon Springs Hydroelectric Project on the Missisquoi River, (acquired by Central Rivers Power / Hull Street Energy from Enel Power in 2020).  The current license stipulates 6 releases be provided on request into the normally bypassed section of class IV-IV+ big water below.  On Saturday May 8th, Gomez and Sullivan Engineers along with Central Rivers Power facilitated a flow study as part of the required Recreational Resources Use and Needs Assessment for FERC relicensing.  Attending that study were perhaps 15 boaters who paddled, filled out questionnaires, ate pizza and generally enjoyed being together as a group for the first time in many months.

From an email that circulated following the study:

“For those of you who weren’t able to make it – we were treated to 3 flows in the bypass: ~2100, ~1400, ~1000.  All three provided different boating experiences.  Personally I found something to really enjoy about each, leaving me to contemplate on the drive home which was my favorite and never arrive at a conclusion.  Regardless the Sheldon Springs rapids of the Missisquoi offer some great paddling, the big water character of which cannot be found elsewhere in the state. Combine this with the fact that dam releases provide the opportunity to boat when there are virtually no other options around, and I would argue the Missisquoi is an indispensable section of river for whitewater paddlers of Vermont.”

As of this posting the study report has yet to be released.  Bob Nasdor has indicated that once the report is released there will be opportunity to comment and followup with ANR and CRP to discuss the results and negotiate and agreement on future release conditions.  Again a huge thanks to Bob and AW for all their work here.  Member up people!

Conversations from the take-out

Where do you head in the state to get your whitewater fix when flows are at summertime lows?

Dry Bridge Rapid (below) and Ithiel Falls with the kids. Lamoille River.

I’m a fan of the Winooski from the Middlesex dam through Hugo and sometimes down to Junkyard. Even at low flows there are playful eddy lines to squirt and you can find creative ways to attain up and around the different currents. It helps that it’s 5 minutes from my house too.

What is your favorite northeast summer release and why?

Summertime favorite release river has to be the Rapid. Good playboating, warm water and epic camping! Just gotta get back there and earn your strokes one step at a time.

Favorite release river is the Hudson because of proximity otherwise it would be in Maine, the Kennebec or Rapid.

Looking forward to a wet summer.

With summer now getting into full swing things are looking up.  Releases around the northeast have been busy with reunions with those we haven’t seen in far too long.  Hurricane Elsa brought a much needed soaking to New England, and though it largely missed Vermont, boatable flows were had and rivers were primed for more.  And at the current moment, loading a forecast brings up icons indicating rain.  Time to go load up the boat.